Golden hour bakes the city in a glorious hue, opening up the streets ready for exploration. Waking up in NYC, jet lag has its benefits.

Our time in The City was taken at an easy pace. Flaunting the local's attitude of moving with purpose, we instead took the time to explore the streets, look up and get lost amongst the hustle.

The acres of park seem to sprout up from nowhere, framed by skyscrapers and grand buildings. The paths twist and curve around sports fields, dog parks, grand fountains and food vendors setting up for the day. Just on the edge of autumn, we got a glimpse of the seasonal transition in the city, looking as glorious as expected. 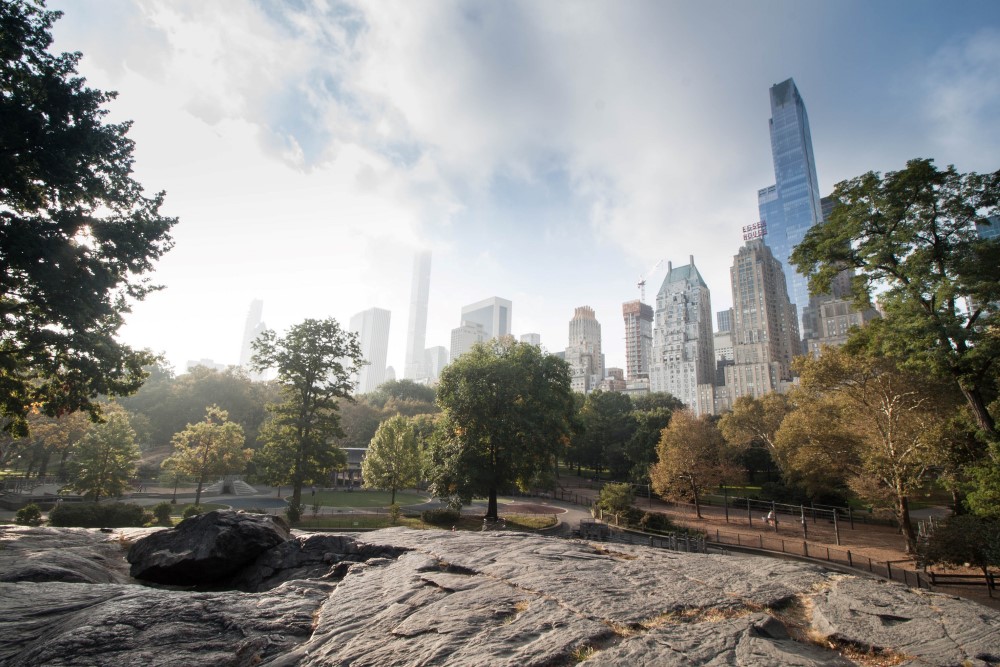 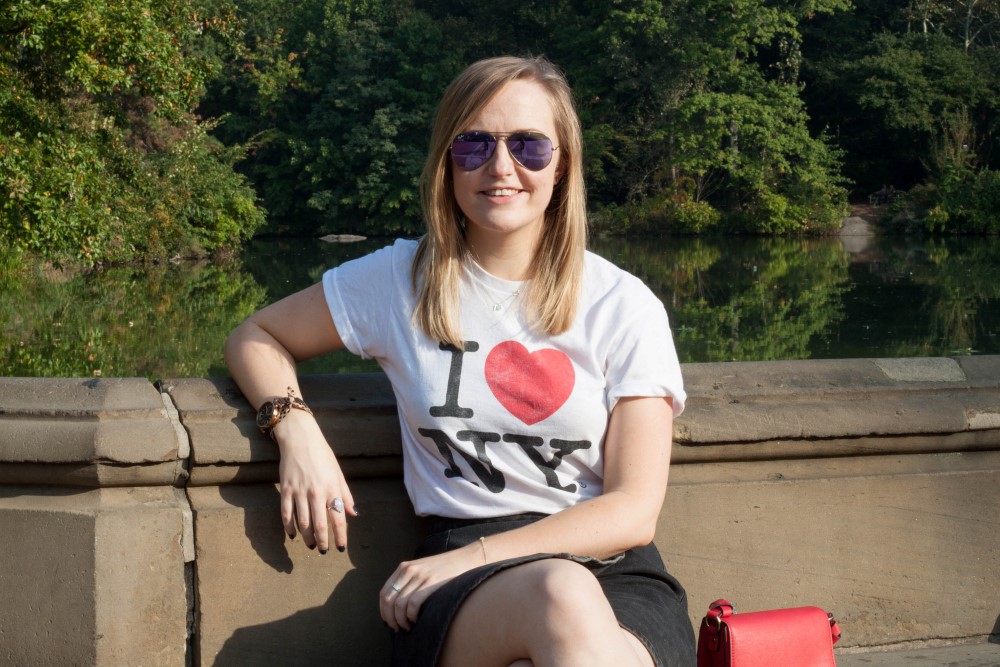 Central Park is a must visit at any time  of the day, but first thing in the morning, you get to live like a local. Whether you're running laps through the mazed paths or taking a slower pace to catch-up over coffee in hand. As with the rest of The City, the locals merge into the visitors and there isn't a play off between the two. Scenically framed shots and memories being made are snapped by visitors, whilst local families and couples take advantage of the golden hour to have a portrait or a shoot in their door-step playground.

The chilled out counterpart to NYC is across the river. Brooklyn Bridge Park, edged with a village of 'while the time away' stores and foodie spots was a highlight of the trip. The jagged skyline of NYC is opened up with the Brooklyn Bridge connecting the dots between the two boroughs. 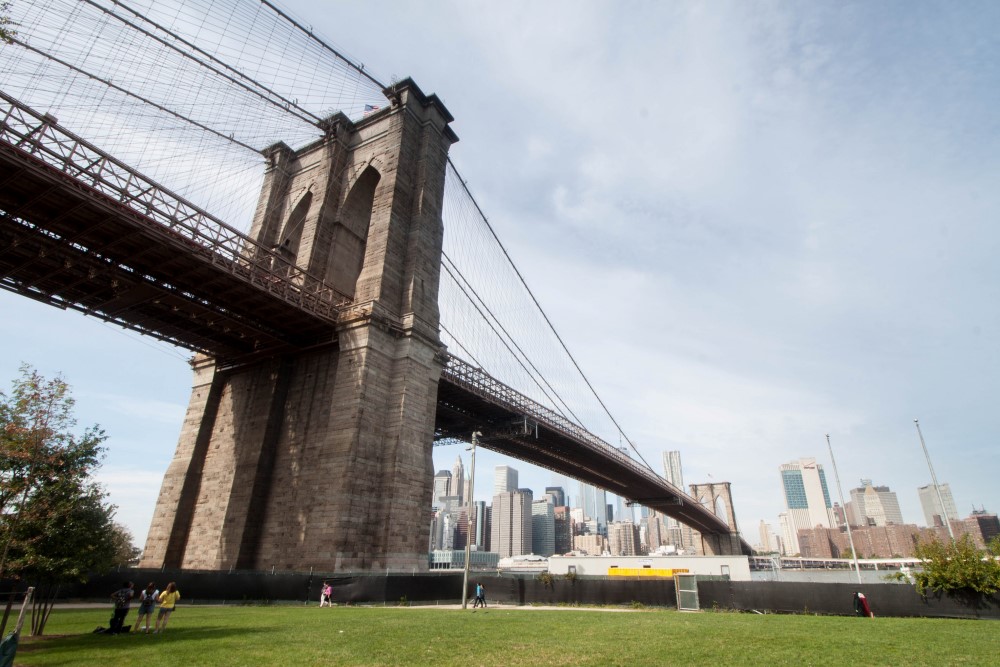 The view is ever changing as boats populate the waters, helicopters circle above and cyclists & pedestrians navigate the boardwalk. It's seemingly top of everyone's list to visit, yet the crowds and business bustle is left to flow inbetween the more urban grid over the river.

Journeying in or journeying out, take the bridge by foot or by cycle over getting lost below the river on the subway. Pedestrians and cyclists battle for the space to get across, tourists stop for their photo ops, whilst locals weave inbetween the pausing crowds, getting from A to B. 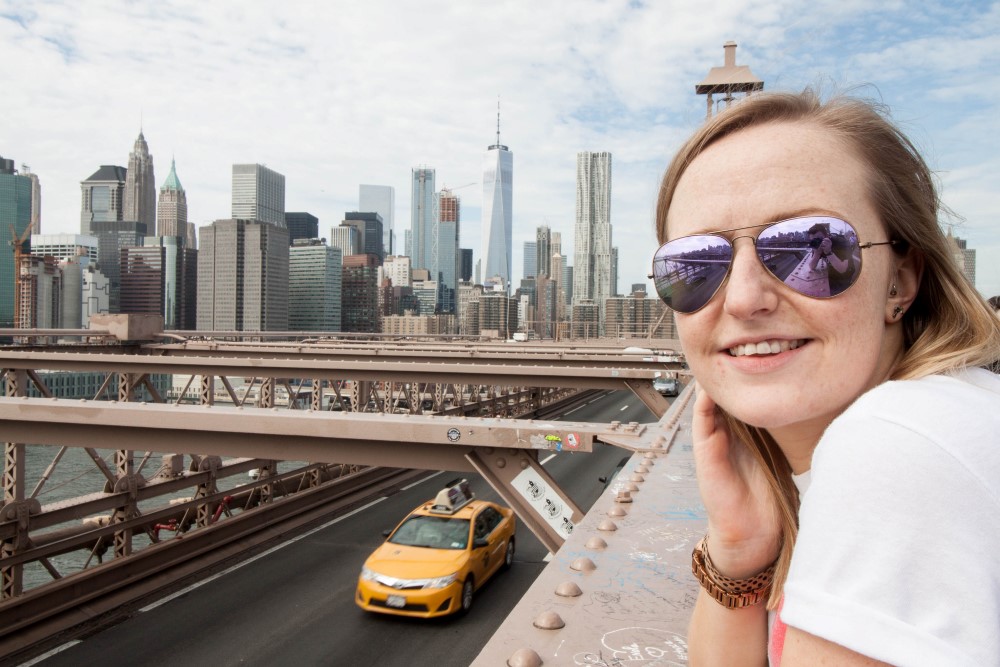 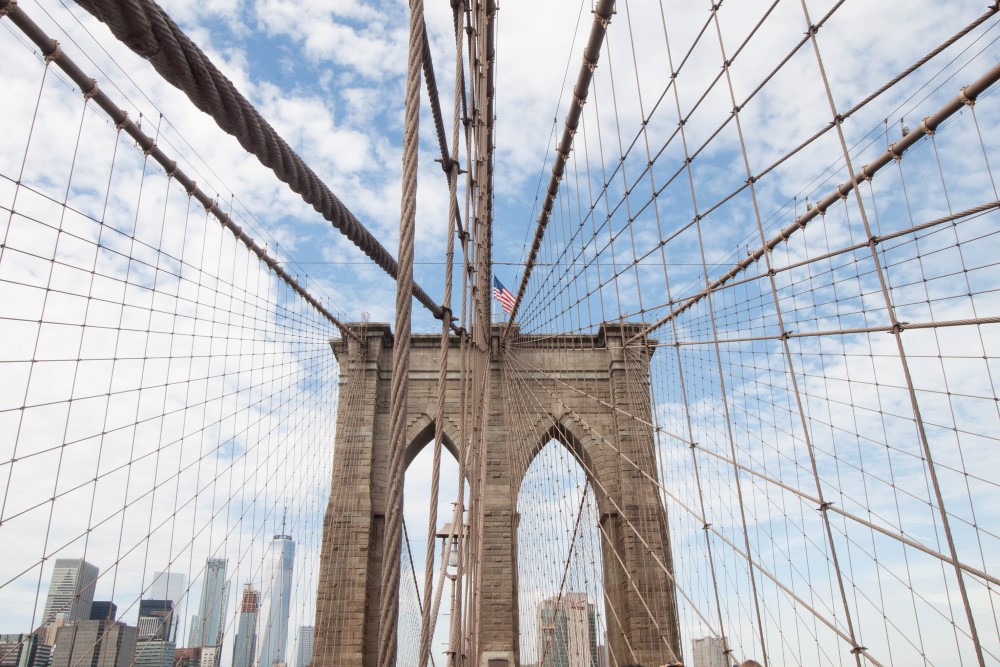 The suspension ropes draw the eye up to the recognisable stone bridge, as traffic and trains flow beneath your feet, none the wiser to the exploration of the eyes going on above them. Whether you want to take the full stretch from one side to the other, or just get to the halfway point, for me, it's a must-do.

With the sun beginning to set on day one, we took ourselves out on the river again to get a different vantage point come sunset. Boarding the Staten Island Ferry gave us a quick adventure over the river, beautiful vantage points for Lady Liberty and another view of that skyline. 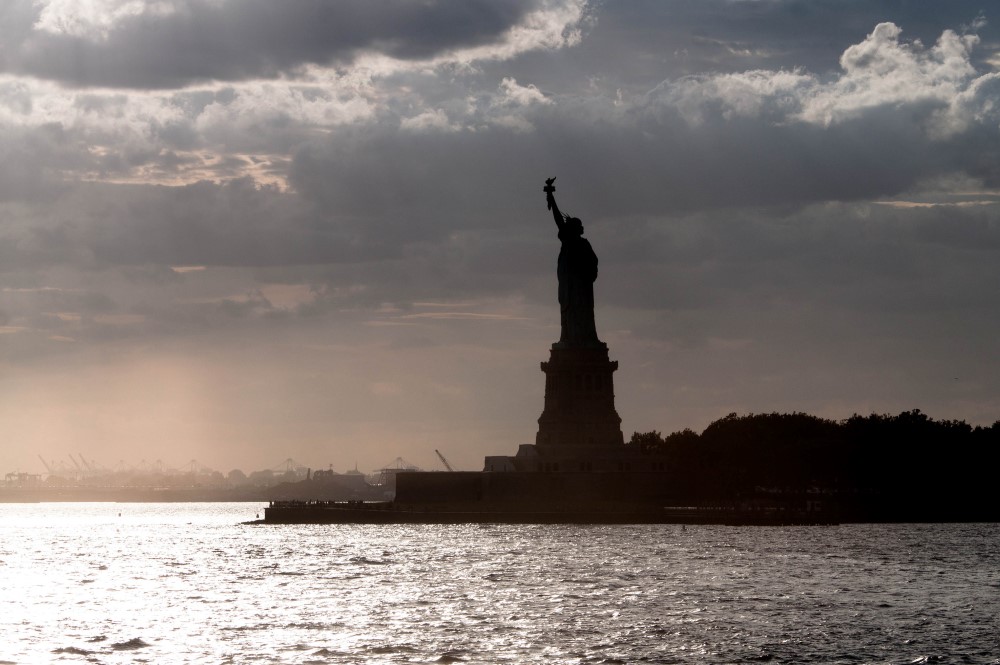 Board the ferry for free and reserve yourself a spot on the side railings to cruise past the gatekeeper to the city, the Statue of Liberty. The 20-minute journey flew by and whilst you have the option to come straight back, we took a beer break at the dock and watched the sunset, glazing the skyscrapers on the nearby horizon with a golden sheen before they began to light up for the night.

Filling the gaps inbetween the buildings, The High Line snakes its way through the Lower West Side. Pocket parks line the disused rail track, with pop-up vendors and artwork lining the walk. The line takes you just under two miles up or down the city (depending on your starting point), if you work your way up, you can finish in the Meat Packing District. 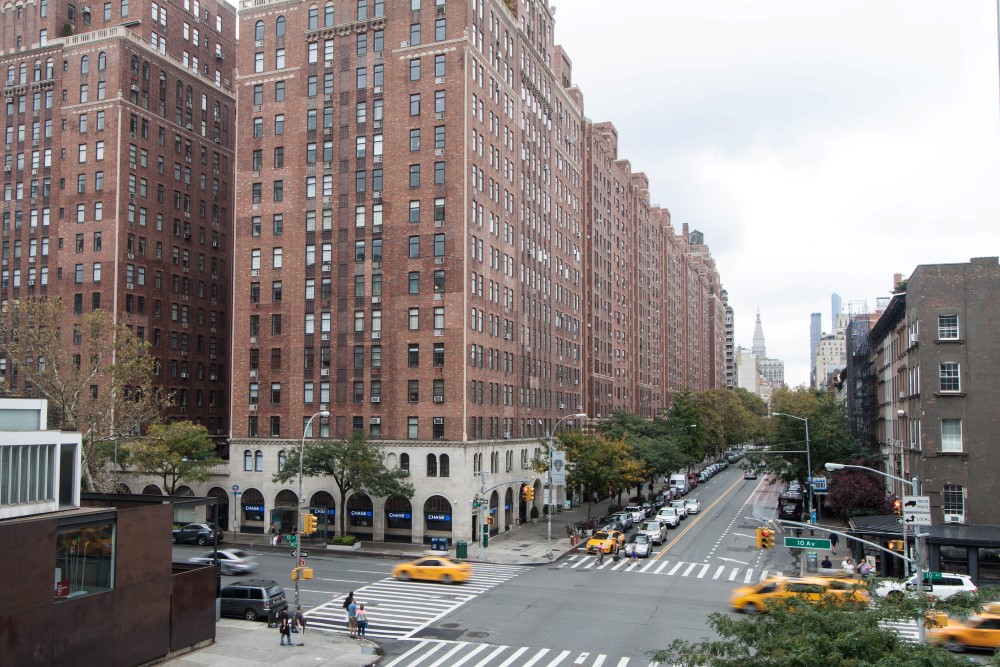 The vintage street cobbles are exposed where the modern tarmac has been chipped away, Chelsea Market opens up behind a street door and cafes are dotted around for you to refuel before your next exploration. Wait for a nice weather morning and take the chance to explore the city from a new vantage point.

No matter what time of day, you will get your ultimate people watching fix at Grand Central. Walking in from the street, the vast terminal opens up before you. The grand open hall is bathed in light for the day as people start their journey in the tunnels or rise up from the subway to start their New York adventure. 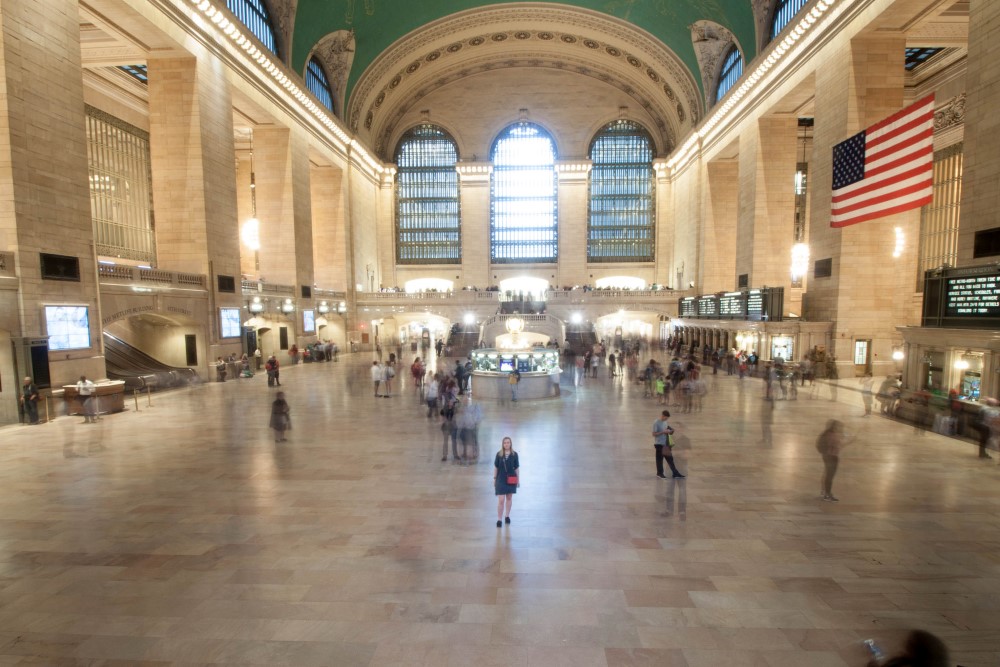 As the crowds ebb and flow through the day, it's a tourist's prerogative to take in the moment. It's an insanely impressive space that I could quite easily while away the afternoon in. The perfect safe haven from a rainy day.

There's something other worldly about walking into Times Square. The illuminated pillars sprout from the ground and bathe the crowds below in blinding light once you reach the centre. Messages, brands, show launches and more vie for your attention as you try not to neglect any of the displays as you spiral around staring upwards. 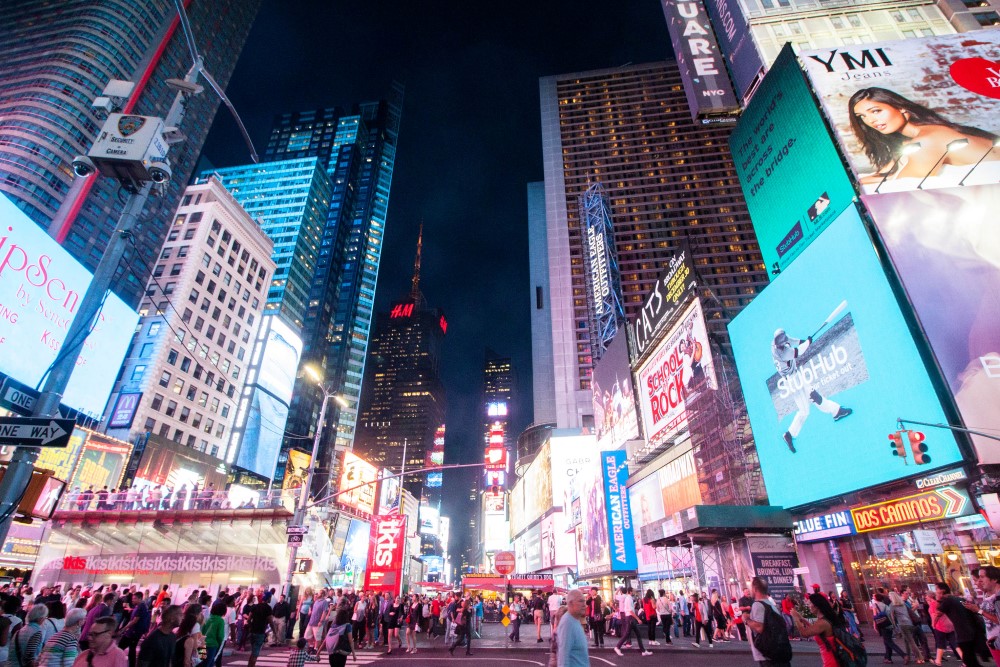 Between day and night there's a clear transformation, the buzz is near warming as the lights thicken out of the darkness come nightfall. The crowds here are at their peak and won't be for everyone, but the sheer scale of light is one to be seen whilst in the heart of the city.

The dream of living in New York ~ without the outgoings ~ was never stronger than when in Greenwich Village. The New York townhouses tower over the slim, tree lined streets, beautiful store fronts creep up on each corner and there are endless house goals racked up next to each other.

Alongside the locals' real estate, there was also an iconic corner I had to visit. A small group had begun to form at the bottom, each eager to document their memory in front of Monica & Rachel's place. 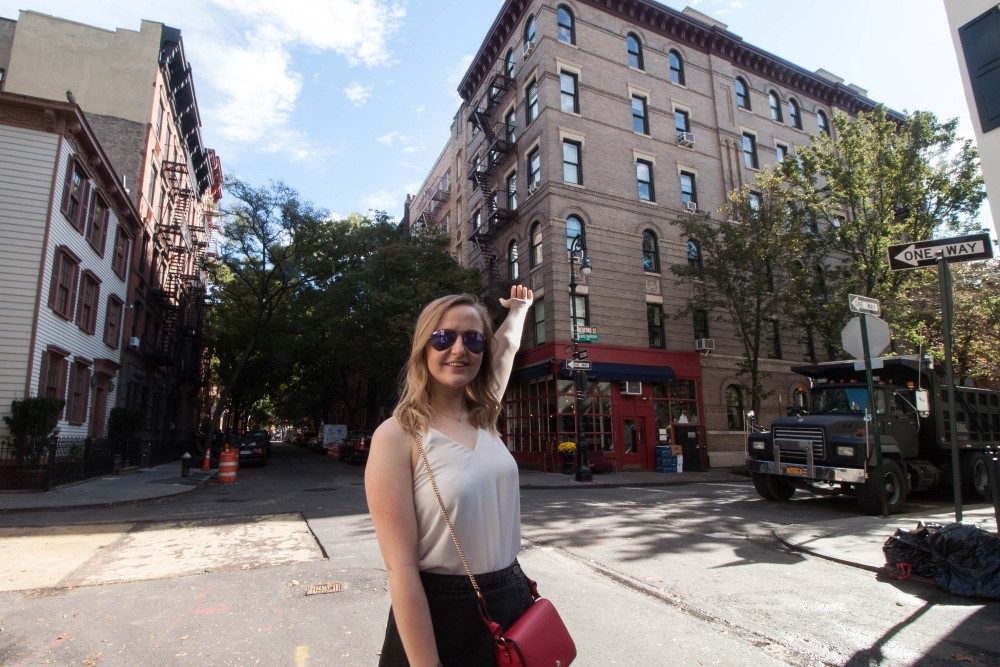 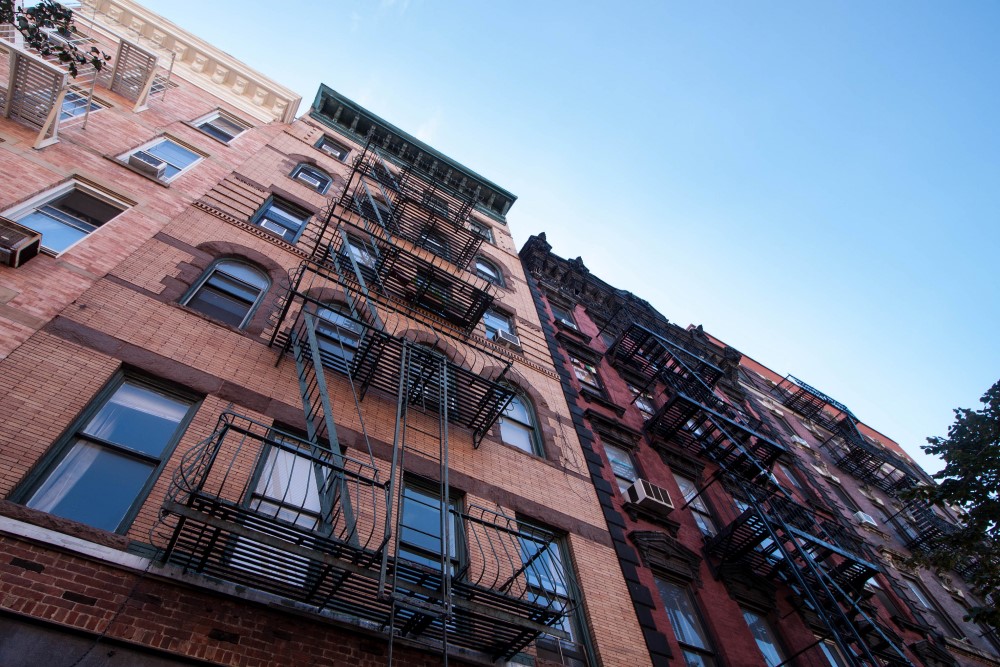 My Instagram-based menu was pretty vast ahead of our trip - coffees, street art, pancakes... The convenience Gods weren't on my side for most of the trip, but whilst in The Village we were in the vicinity of Jack's Wife Freda. A humble little insta spot, complete with genuinely delicious food - and coffee. Our Greenwich Village finale before we ventured onto the subway for our next spot.

Time for the finale, the close of the show and the ending of our time in New York City. Ascending the 70 floors to the top of Rockerfeller just ahead of sunset. It's forever going to be a tourist trap unless you get there at the very first thing or the very last thing, but watching the city be tucked in under that golden blanket before being checkerboarded in lights - the best way to end a trip. 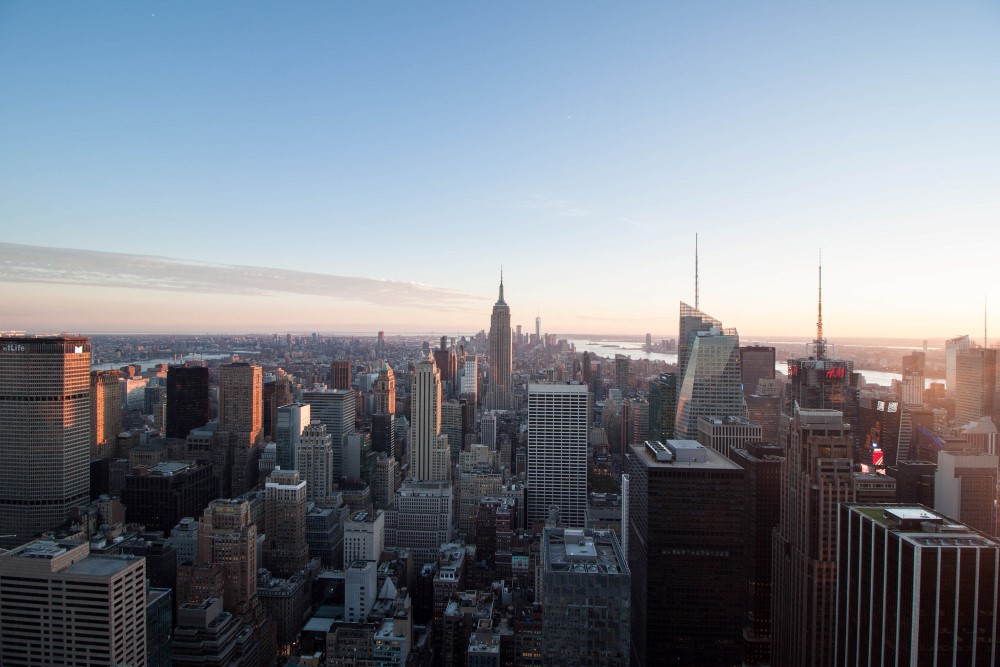 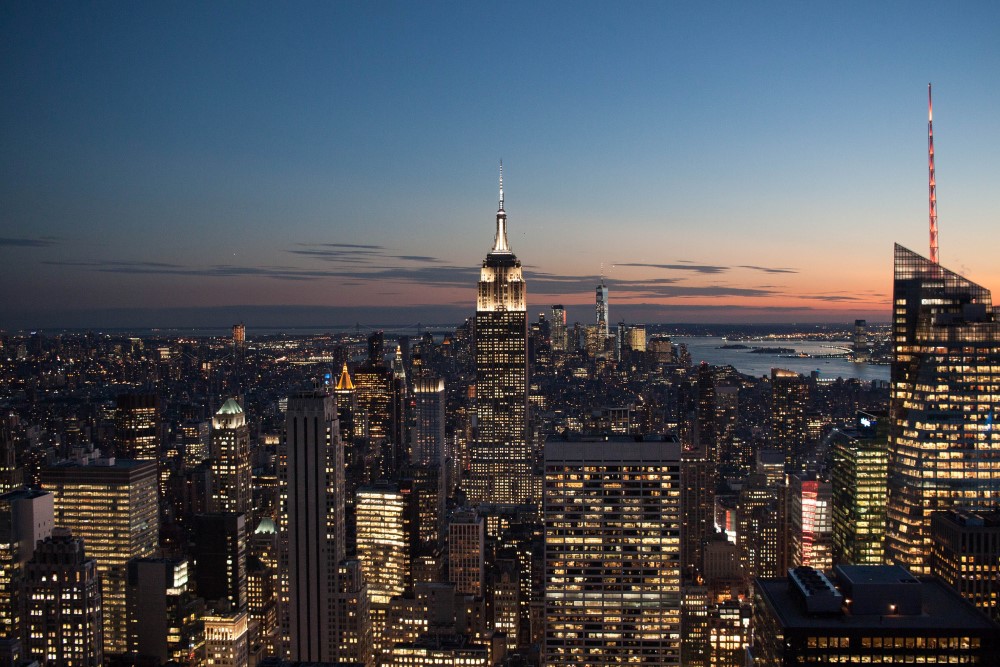 One side gives you Central Park, the other (and seemingly far more covetable) gives you the Empire State and beyond. We battled with the crowds to get the shot, fulfilling every angle before we headed back down to earth. That iconic skyline is seemingly beautiful from every angle, but I'm not sure there's a better vantage point than a 360 circuit of the high rises.

Diving inbetween the skyscrapers, ticking off the NYC cliches and introducing my boyfriend to what immediately came my favourite city on my past first visit. For all the hustle and bustle and the crowded hot spots, it's still an absolute must-visit for me.

I'll no doubt be back again soon enough to explore another slice of the city.

All photos by Matt.