So, a product doing the rounds of the blog world recently seems to be the Collection 2000 polishes. 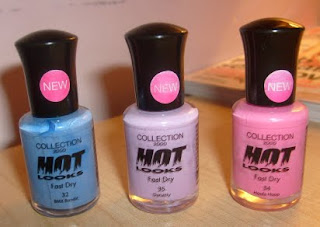 This brand is usually one I would walk straight by, i usually associate cheap with rubbish, but i think the Sleek palettes are just one product that works against that.
The colours within the 'Hot Looks' range are pretty impressive, and as i am a sucker for a good purple, 'Dynasty' really drew me in. Which was then followed by a 3 for 2 offer, meaning i had to pick my next two favourites.
While the colours are impressive, it still isn't a brand that amazes me, despite the numerous rave reviews I have experienced. This was a product I was bullied into buying by the peer pressure world of blogging, as I said, I would normally have not looked twice at the Collection 2000 'stand'.

So, onto the actual polish.
I first tried Dynasty (#35) being the favourite of the bunch. 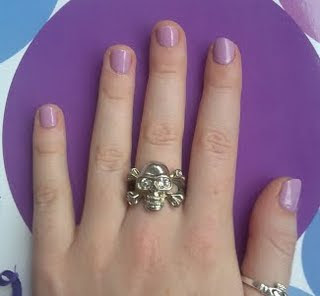 I am constantly on the look out for the perfect pastel purple. This doesn't quite get there, but it makes a good effort. It changes though, in some lights it's a really dark pastel purple, other lights really pale and others still, a pale pink. So if you're looking for a multi tasking polish, this one is for you.
It goes on alright, but can be streaky if too little is on the brush. I found myself touching up the odd nail to make them appear smoother. 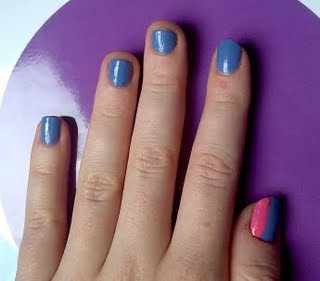 Yes there is a streak of 'Hoola Hoop' (coming up), which looked a lot better here than on it's own. But, the BMX Bandit is actually my favourite after application. This applied really smoothly, and I didn't need to re apply to any nails, I always apply 2 coats, so this non streak theory is a view from two coats. It is more periwinkle than a blue, and it again changes colours, from blues to purples. I like the purple side of things better, but it's always a winner for me. 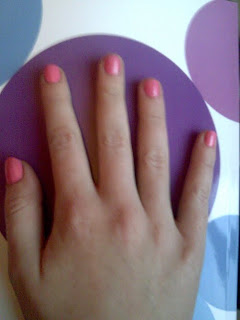 Apologies for the blurring...

This one is one of my least favourites. There isn't many pinks that I don't like, and in some lights it's tolerable. But sometimes I think it's a little too, 'in your face' pink. But this applied the best out of them all I think, and is manageable with just one coat (on most of my fingers anyway). I think this is just a better option for nail art in my opinion, instead of being too garish with the talons.

I think this is the subject that is what determines a good polish. It is with me anyway. Sadly, these polishes aren't going to amaze you here. There was wear after just one day, and fuller chips after two. The pink colour seemed to chip incredibly easy, but maybe i just had a more active day after that application.
This was done with no top/base coat, to test the full staying power of the polish on it's own, i've yet to try it with a top/base coat.

On the bottle it states they are fast drying, which is an area where they do excel. Not amazingly fast drying, but noticeably different to those that don't advertise this quality.

Overall...
They get my vote in the colour range, but otherwise they just don't cut it for me. The price is obviously another winner, but in this case it follows the cheap = lower quality route, which is a shame when they offer such good colours!
I think these are better for a night out or event where you can just take it off as soon as the nights over, instead of choosing it for it's lasting power.
Actually, these would be really good for middle schoolers, as in our school you weren't allowed nail varnish, but if it's only going to be worn for weekends then these get a good thumbs up.