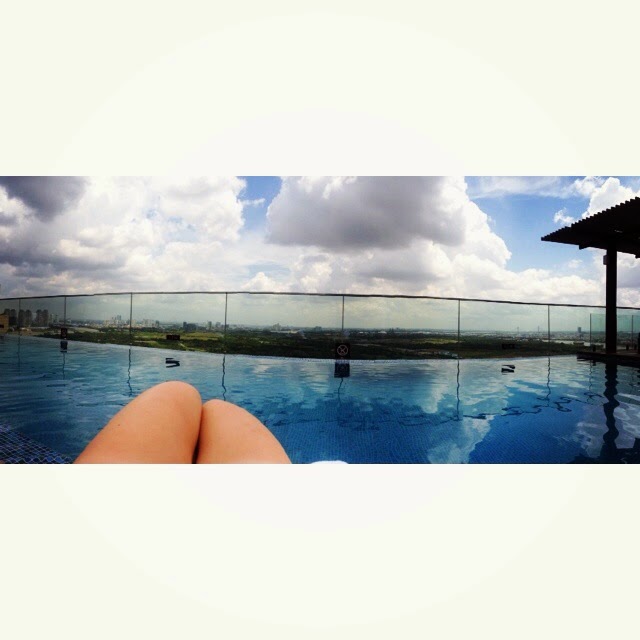 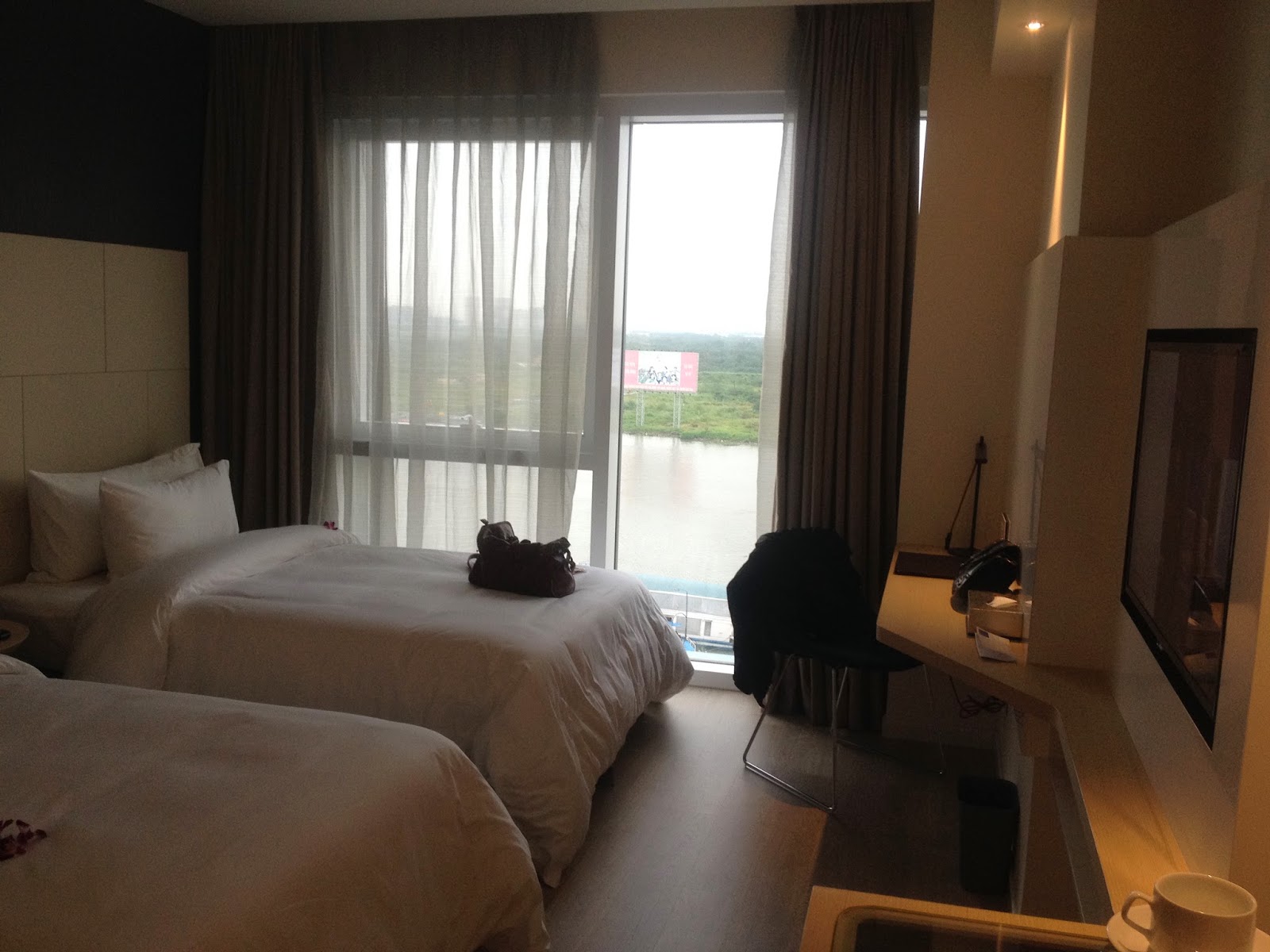 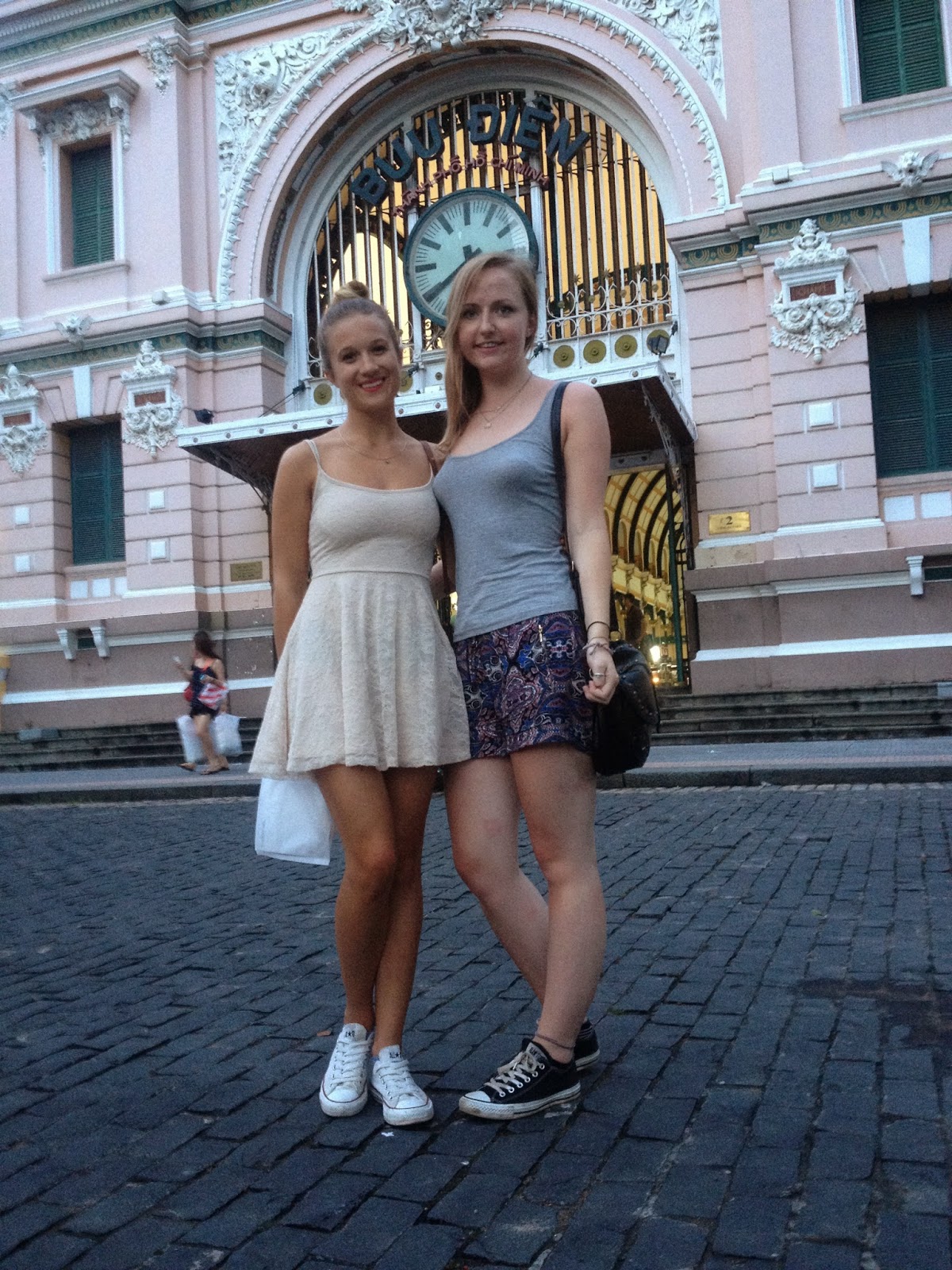 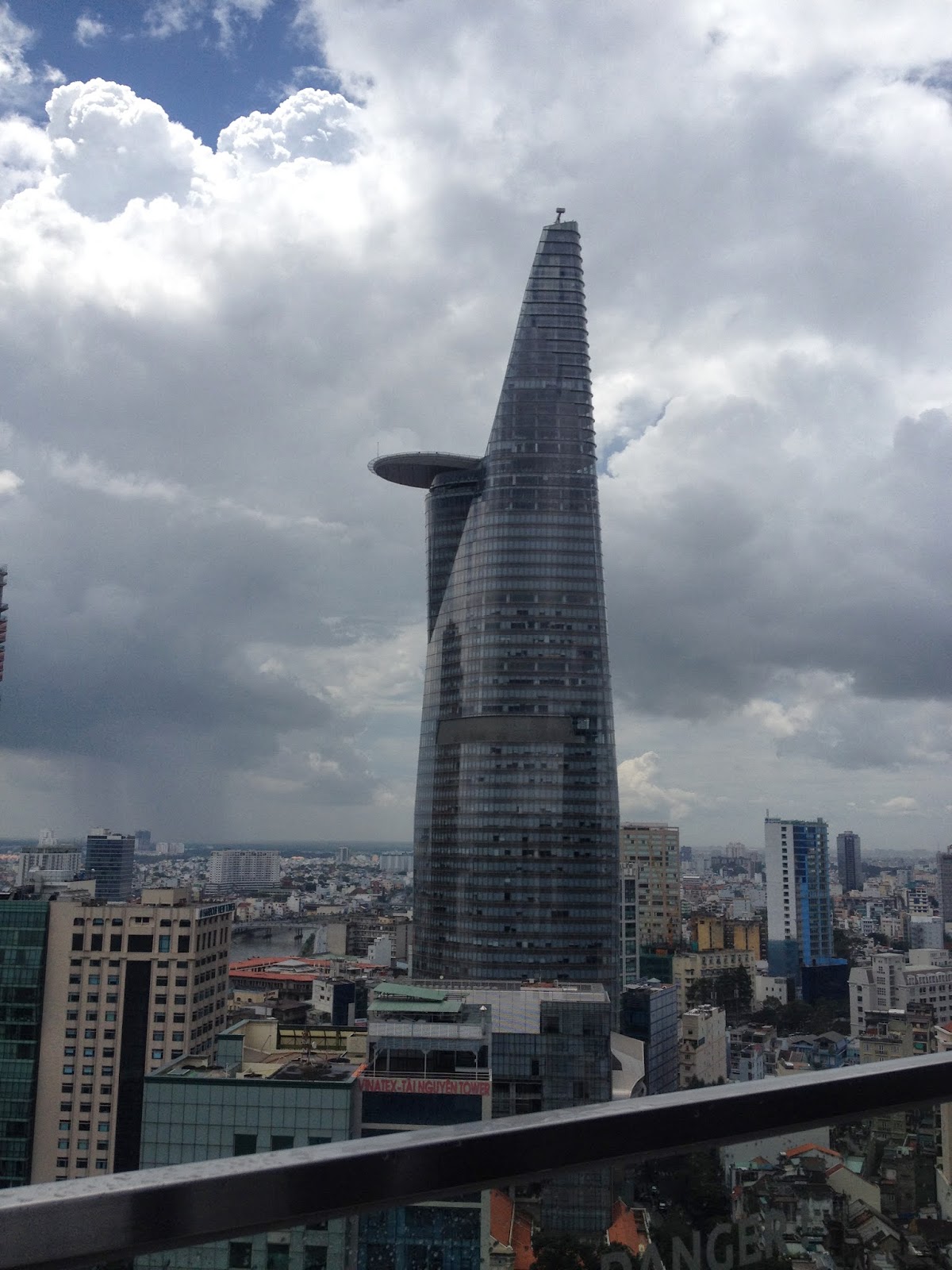 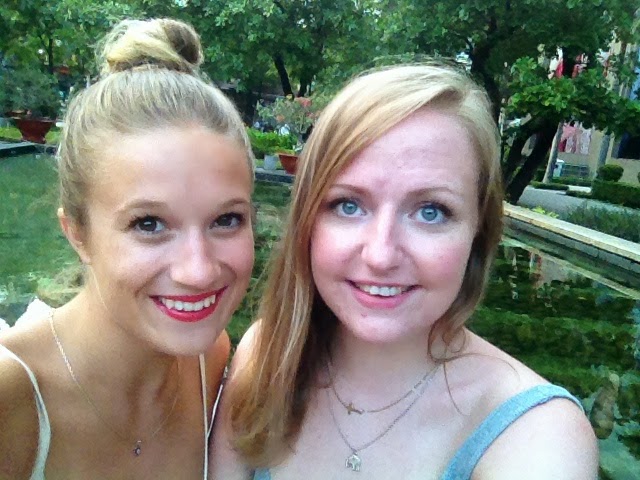 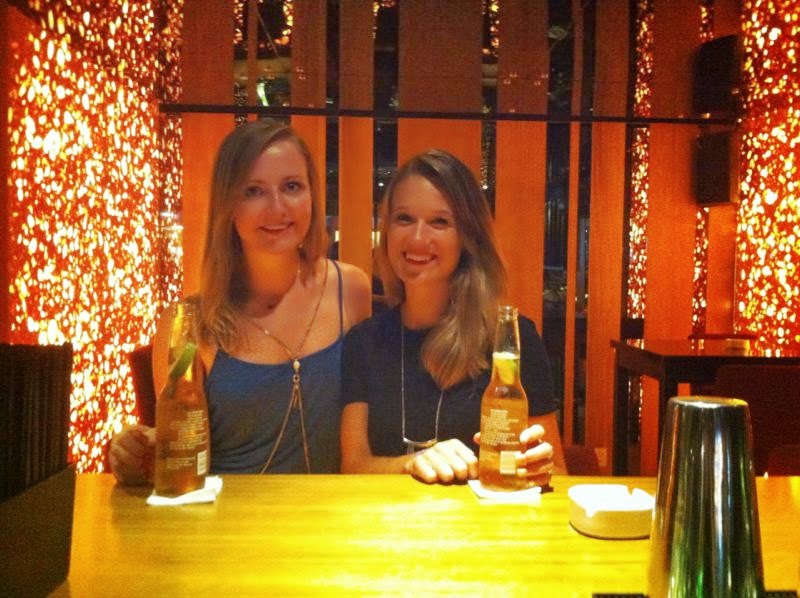 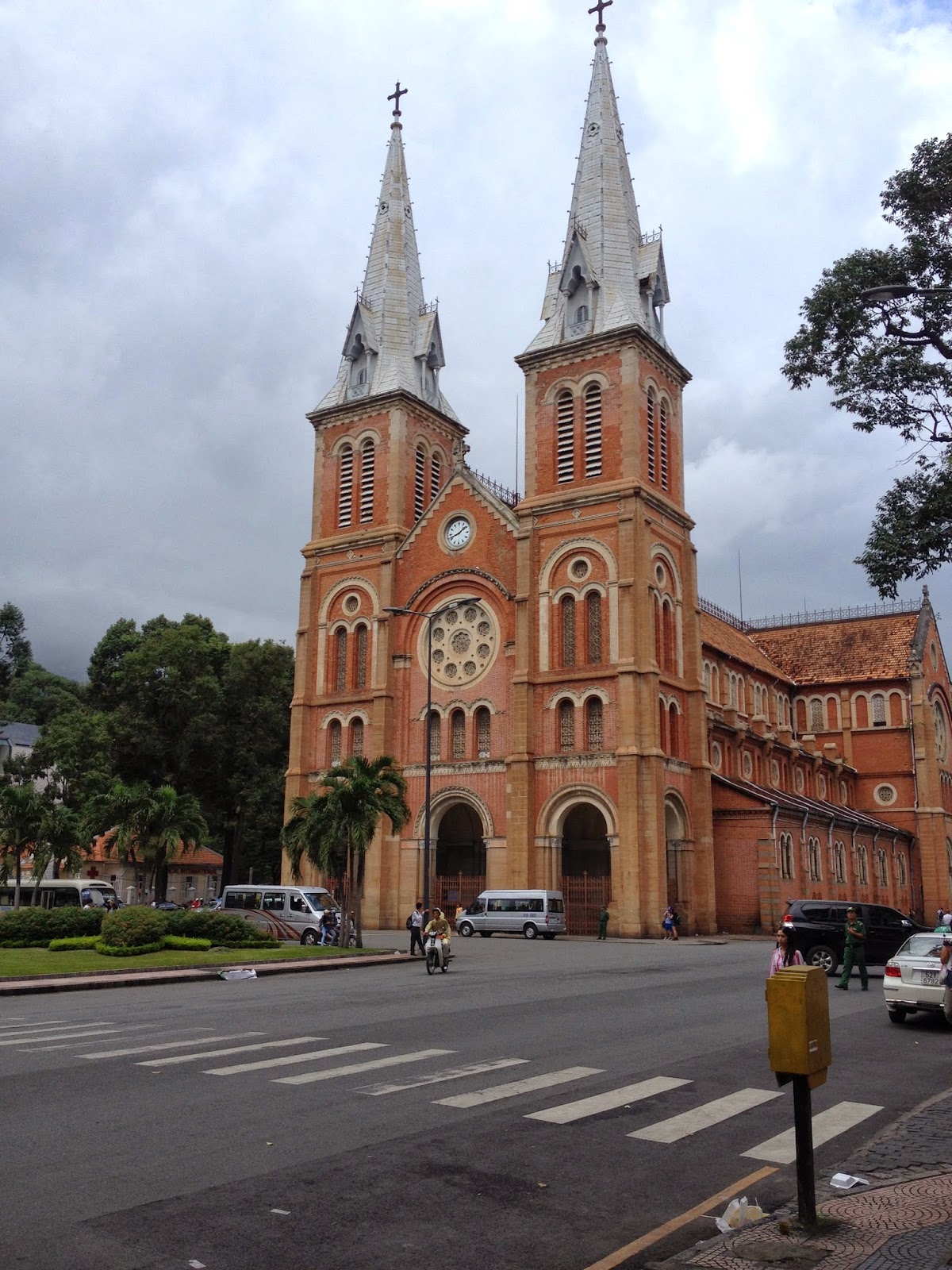 Ho Chi Minh was definitely a break from backpacker life. I think the horrendous journey into Vietnam had s pretty down, so it was a good point to take a break. It may be lucky then that the majority of our time in the city was also submerged under torrential downpours. Hence the not so friendly cloud acting as the backdrop to Saigon's Notre Damn, above.

Where to Stay -
Straight off the bus, we'd booked into a hostel - thank God. First stop was The Town House 50. I would highly recommend this, especially for a higher end hostel. Private rooms average at about £12 a night, but we stayed in a 4 bed, all girl dorm, so it worked out slightly cheaper. There's breakfast included, basic but still really appreciated, as well as boiling showers (you'll begin to see these as a serious luxury). It's also got really helpful staff and a 24 hour reception. It's down an alley off a main street, illuminated by a neon sign on the very top of the building. Definitely book in advance if you're thinking of staying here, it gets full.

Seeing as we'd celebrated my birthday in the traditional method - see my Siem Reap post if you haven't already - we figured a more luxe celebration was in order. Due to the incredible exchange rate, five star was entirely possible. We checked into the Liberty Central which is right by the river, our room looked over it from 12 floors up. It worked out at around £35 per night, for royal treatment, an unforgettable and seemingly endless breakfast buffet, rooftop infinity pool and the softest bed I've ever slept in. If your budget allows it's well worth it, especially considering you can barely get a basic Travel Inn for that price in the UK.

The torrential downpours come immediately and with no warning. For this reason, don't take your phone up to the pool, a la moi. My lifeline that is - took a dip in the shallows in a moment of rain panic. It survived to tell the tale and didn't even have a blip from it. That right there is one of the many reasons I'm so obsessed with my phone.
What to do -
The French Quarter Vietnam has a pretty strong link to France in its architecture. There's a French quarter in the majority of big cities, Ho Chi Minh included. Here there are beautiful buildings and some serious designer strips to lust over. In juxtaposition to another night market based in the centre, lined with fakes of all included in the strip.
The Bitexaco Tower is the modern landmark of the skyline, paired with Ho Chi Minh's obsession with neon lights - Vietnam really has a thing for neon lights. You can go up to the top which I can only imagine has amazing views over the area, although our stay was tucked under thick cloud the majority of the time, so the price didn't seem worth it.
Weather in mind, the tower is also home to a cinema - may not be the most cultured thing to do, but the rain compromises a lot of the outdoor culture in the city. They show Western films before their UK release (we saw Runner, Runner with Justin Timberlake which was awesome. I'm not sure it even got released here). It's also insanely cheap, another excellent exchange rate bonus.
The Ho Chi Minh Post Office is prime tourist destination, it's a beautiful building - and was the only place I sent a postcard from on the trip - the square outside is great for Vietnamese coffee - coffee lovers rejoice, because wow - and people watching. It's right opposite the Notre Damn cathedral, much smaller than the famed Parisian one but still beautiful. Obviously it closed just as we go there. Ho Chi Minh definitely wasn't our time for tourist activity.
Currency -
Vietnam deals in dong. Thousands of dong. £1 is around 34,500 dong now (I think it was 33,000 when we were there). Remember this at ATMs if you're using them. I ended up getting less money out than the £1.50 charge for withdrawing it. The exchange rate makes for really cheap living & shopping out there which is a bonus.
Like with all regions, you'll get used to dealing in thousands quicker than you'd think, but I had serious issue with getting to grips with this for some reason. By this point my maths skills were just generally hilarious because of how bad they'd become.
Need to Know -
HCM is where you'll need to get to grips with Vietnamese driving - zebra crossings exist but vehicles will never pause for pedestrians. From watching local example, the best procedure is to look straight forward and walk. I didn't do this and stared at the swarms of mopeds. They learn to move around you but it's a pretty terrifying experience.
HCM seems to be the tourist area of Vietnam. The brilliant thing is, it's holding on to its culture and while there are western elements and it's entirely comfortable there's still a language barrier, local cuisine and not a McDonald's or Starbucks in site. Which I loved.
Eating wise there are loads of places to choose from, we had Vietnam House recommended by the hotel, which wasn't anything special. I'd recommend stumbling upon something better. We did this with bars and it worked a treat, if a little expensive.